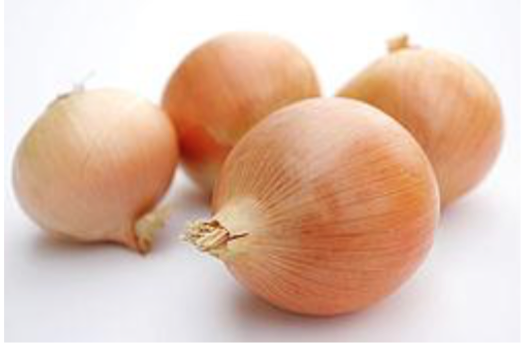 Although onions contain many of the same sulphur compounds found in garlic, onions bring you even more benefits with their high flavonoids content, particularly quercetin. Quercetin acts like an antihistamine and an anti-inflammatory. Quercetin and cancer are incompatible with each other. Studies suggest that quercetin may have the power and ability to slow the growth of cancer cells, stop cancer cells from migrating to other parts of the body (metastasis) and force cancer cells to die in a variety of ways, such as choking off their blood supply or by triggering cancer-killing genes.

Cornell University researcher, Rui Hai Liu, MD, Ph D, an associate professor of food science, tested 10 varieties of onions and shallots (a relative of the onion) and found that the members of the onion family with the strongest and most pungent flavour are the best varieties for inhibiting the growth of liver and colon cancer cells.

Fresh, uncooked onion samples were used, with extracts taken from the bulbs, with the outer skin removed. The study showed that the shallot, a staple in most Asian, Mexican, French, and Mediterranean cooking, had the highest antioxidant activity among the 11 varieties tested, with six times more antioxidant compounds than the lowest-ranked onion, the Vidalia, which had the mildest flavour. The shallot also had the greatest effect against liver cancer cell growth.

Researchers also found that women who ate two or more 80-gram (2.82 oz) servings of onions a week had a 60% lesser risk of developing endometrial cancer. Consuming onions at least one time or more than one time a week has been shown to lower the risk of stomach cancer in China. The researchers of this study proposed that increased onion intake prevented the growth of the ulcer-causing micro organism, Helicobacter pylori, that has been linked to stomach cancer. The onion contains fructo- oligosaccharides—compounds that have been shown to stimulate growth of healthy bacteria and suppress the growth of potentially harmful bacteria in the colon. This may explain the onion‟s role in preventing colon cancer. Onion extract was found to kill tumour cells in test tubes..

Studies show that onions reduce blood sugar in people with diabetes. One study compared the effects of administering either insulin or 100g of crude red onion to patients with Type 1 and Type 2 Diabetes. The results showed that although the blood glucose levels did not decrease to the extent achieved with insulin, onions nevertheless dramatically decreased the blood sugar levels. Also, there was an increase in blood sugar levels for the first hour after onion consumption. This was attributed to the onion‟s glycogenic effects, which would counteract the common side effect of hypoglycaemia of many anti- diabetic drugs like insulin.

The main active ingredient in onions that lowers blood sugar is the sulphur compound known as allyl propyl disulphide (APDS) which blocks the breakdown of insulin in the liver leaving higher levels of insulin in the body for it to cope with diabetes. Onions also contain a mineral called Chromium that helps cells respond to insulin thereby assisting with blood sugar control.

The juice of an onion has been used to treat insect stings, warts and itching from chilblains, a skin inflammation due to poor peripheral blood flow to the extremities. As published in the Journal of Cosmetic Dermatology, USA, researchers have found that the use of onion extract gel on surgical scars made the scars softer and less red, with a smoother texture and an overall better appearance.

Aside from being sodium-, fat- and cholesterol-free, onions are a very good source of immune-system- boosting Vitamin C. One cup of raw onions provides 20% of the Daily Value of Vitamin C. In addition, onions are a good source of enzyme-activating manganese and molybdenum as well as heart-healthy vitamin B6, fibre, folate, and potassium. In terms of percent Daily Value (percent of the nutrient you need each day), 1 cup of raw onions provides 11% fibre, 11% molybdenum, 10.5% manganese, 10% Vitamin B6, 8% folate, 7% potassium, and 6% tryptophan.

Are You Losing Your Hair? 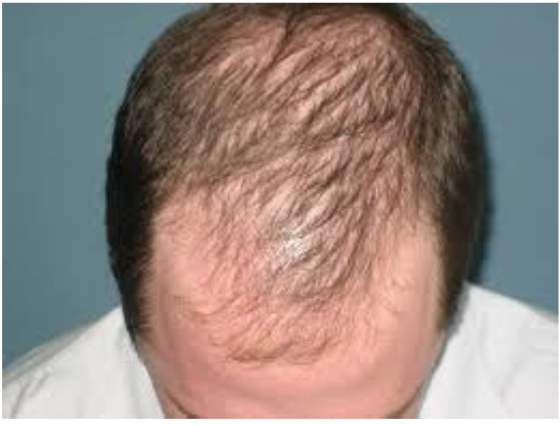 With about 100,000 to 150,000 hairs on your scalp, losing about 50-100 hairs every day is normal. However,ifyouseebaldpatchesorlotsofthinning,youmaybeexperiencinghairloss(alopecia). The causes of hair loss are many. When hair loss begins suddenly, the cause may be due to illness (a major surgery, high fever, severe infection, or even the flu), poor diet and nutrition (a diet low in protein and iron or a crash diet leading to weight loss of 15 pounds or more), prescription medicines (which treat arthritis, depression, gout, heart problems, high blood pressure, glaucoma, ulcers, Parkinson‟s disease, or high doses of Vitamin A), hormonal changes and imbalances due to pregnancy, childbirth, discontinuation of birth control pills or the onset of menopause.

If hair loss is gradual and becomes more noticeable with each passing year, a person may have hereditary hair loss or androgenetic alopecia. This kind of hair loss, also known as male/female pattern baldness is the most common. Hair loss can be the first sign of a disease. About 30 diseases, including thyroid disease, Polycystic ovary syndrome, anaemia, ringworm of the scalp, and eating disorders cause hair loss. By treating the specific disease, hair loss may be stopped or reversed. Other causes of hair loss include radiation and chemotherapy from cancer treatments, stress (e.g., from experiencing a traumatic event such as the death of a loved one or divorce), and lack of adequate sleep.

The following hair care practices can cause hair to fall, become dry or break:

Applying herbal hair oils such as coconut, olive, almond or amla (gooseberry) can increase the tensile strength of hair, reduce frizziness, prevent breakage and by coating the hair, form a protective layer for the hair shaft. Oils moisturize (coat and seal the hair shaft from root to tip to prevent loss of moisture), condition and nourish the scalp with amino acids, fatty acids, vitamins and minerals. Further, adding essential oils like cedar wood, thyme, lavender or rosemary to these oils further stimulates hair growth by increasing blood flow to the scalp. Since it‟s not recommended to apply essential oils directly to the scalp, apply to the hair after adding a few drops of the essential oils to the base oils.

In one study, a daily scalp massage with the essential oils of rosemary, thyme, lavender and cedar in a carrier mixture of jojoba and grape seed oils showed more hair growth for one group after 7 months than a second group who used only the carrier oils. In another study published in The Journal of Dermatology, Japan, 20 of the 23 people who applied onion juice to their scalps twice a day saw hair growth in six weeks.

A study in the Journal of Alternative and Complementary Medicine, USA, reported that hair growth improved for men taking an herbal extract of Saw Palmetto daily. Some studies have shown that this herbal supplement may be just as effective as the prescription drug Finasteride, for treating hair loss, without its side effects. Male and female pattern baldness has been linked to the conversion of the male hormone testosterone to DHT (dihydrotestosterone); Saw Palmetto disrupts the formation of DHT. In another study, 100 percent of people who supplemented with Methylsulfonylmethane (naturally occurring in cow‟s milk and leafy vegetables), which aids in the production of keratin (a protein in hair) showed reduced hair loss and increased growth in only six weeks.

 You may share this newsletter with your patients. Their questions should be directed to you for answers or for research and response. Thank you for your cooperation.