The practitioner writes: On the evening of 15 July 2015 I returned home from the office around 6:40pm to see that the water in the outside drain was disturbed. I thought that it must be a snake or frog, but no, it was a little myna bird who had fallen into the drain and was trying to get out. The bird’s wings were completely wet so it was not able to escape. I scooped up the bird with a plastic bucket and set it down in some grass by the roadside. But the bird fell over and was unable to sit upright. It was shivering and losing consciousness.  Fearing that the bird might die or that street dogs would finish it off unless timely treatment were provided, I picked it up again with the plastic bucket and brought it into my courtyard. The bird was still unable to sit and continued shivering. I picked up my Common Combo kit and put 2 or 3 drops of CC1.1 Animal tonic on its upper beak. Within a second, the myna regained consciousness and sat on both legs.

After 15 minutes, the bird began to move a little. I thought the bird needed an energy booster, so I applied 2-3 drops of CC12.1 Adult tonic and a bit of Swami’s vibhuti to the upper beak. At this, the bird suddenly opened its beak wide and spread its wings, and its body began to regain full energy. After 45 minutes, the bird appeared to have completely recovered and started moving about the courtyard. After 9pm I saw it chasing after pests to eat. After 10pm it was asleep under my scooter. In the morning only its droppings remained. The bird had flown off on its journey. 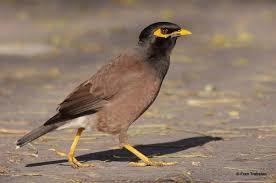