Do you enjoy drinking cold beverages with your meals? For those who like to drink cold water or beverages with their meals, be aware of a danger. While it may be enjoyable to have a cold drink with a meal or after a meal, the cold liquid will solidify any oily foods just consumed and slow down digestion. Once this "sludge" reacts with the stomach’s acid, it will break down and be absorbed by the intestine faster than the solid food. It will line the intestine and very soon, this will turn into fat that can lead to cancer. It is best to drink hot soup or warm water after a meal. The Chinese and Japanese drink hot tea with their meals, not cold drinks. Maybe it is time we adopt their drinking habit while eating.

A Serious Note About Heart Attacks: Women should know that not every heart attack symptom is going to be the left arm hurting. They may never have chest pain during the first course of a heart attack. Nausea and intense sweating are also common symptoms. Be aware of intense pain in the jaw-line. 60% of people who have a heart attack while they are asleep do not wake up. Pain in the jaw can wake a person from a sound sleep. Let's be careful and be aware. The more everyone knows, the better chance for survival. 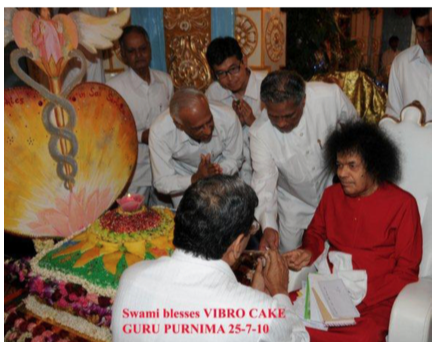 For the third consecutive year, the Lord in human form, Bhagavan Sri Sathya Sai Baba showered His blessings in abundance on the entire Vibrionics team by providing a golden opportunity to present the Sai Vibrionics cake and prasadam at His Lotus feet on the auspicious occasion of Guru Purnima.

At the beginning of July, a team of Vibrionics practitioners from Japan reached Parthi to begin preparations for Guru Purnima. Assisted by local volunteers, the team prepared and packaged 15,000 packets of prasadam. Greek devotees prepared the beautiful Sai Vibrionics cake.

There was great excitement amongst the Vibro team on the eve of Guru Purnima when Swami directed the prasadam to be distributed to all those seated in Sai Kulwant Hall. 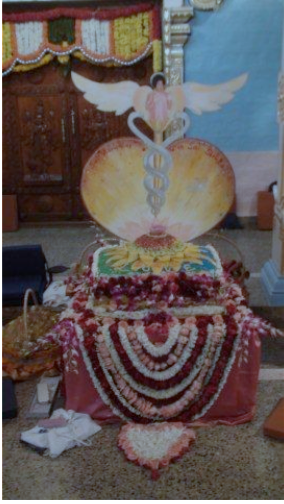 The next day, Guru Purnima, Swami came out of His residence, Yajur Mandir, only in the afternoon. Students and devotees sang beautiful​Guru bhajans as Swami made His way through Sai Kuwault hall. As Swami approached the verandah, the Vibrionics team humbly offered Him a rose. After accepting the rose, the Lord lit the flower-shaped candle (made by an Italian practitioner) and, with a beautiful smile on His face, graciously cut the Sai Vibrionics cake. Following the music program, Swami blessed more prasadam and, to the delight of all, He handed the little packets to the performing artists.

Even though, on the whole, the response from patients to Vibrionics has been excellent, we’re all puzzled, once in a while, when patients with the same problem respond differently to the same remedy. We also sometimes wonder why one remedy works better for one practitioner and not so well when someone else prescribes it...

Several factors come into the equation but of them all, FAITH tops the list. Here we are talking about the Faith of the practitioner – his Faith in the power of each remedy to heal, his Faith in the latent shakti that our beloved Master has infused in each one of the 108 Common Combos. Right from the start, Swami, in His gracious physical form, blessed the system of Vibrionics. On countless occasions, He has reassured us that He is the healing force behind this system – while we are all mere instruments, He is the One who cures. It was His hand that guided the creation of the 108 Combos and His hand alone guides their use. All practitioners must have the Faith that they are a channel of Swami’s will and compassion to help their fellow beings. As important as it is for practitioners to have faith, it is also important that patients be encouraged to believe that they can be cured. As Jesus said once to someone who pleaded for healing, “Go, your faith has made you whole”. With the Faith of both the healer and the patient, anything is possible.

The next most potent ingredient in the healing process is LOVE. When a practitioner with faith has decided which remedy to administer, he must open his heart to the patient with love and compassion. Swami Himself, in numerous discourses, has reiterated how treating a patient with love can spur on the healing process. In fact, love can prove more efficacious in healing than the remedies we may prescribe! Every practitioner should send a loving prayer for each patient. We must strive to radiate pure love without any trace of ego or self-importance.

The third ingredient which then takes over is TRUST. The practitioner has to trust that patients are being given exactly what they need. Some patients may become absolutely alright with the combos given. Other patients may not feel the full benefit of the remedies. We have to understand that, as human beings, we can only see the patient, his ailment and the healing on a physical level. All we can do is to Trust in the Lord and believe that the patients are being given what they need, to bring about a complete healing in not just the body but also in the mind and spirit.

Swami always says, “Do your best, Let Sai do the rest!” All we need to do is to carry out this wonderful seva that Swami has given us with FAITH, LOVE and TRUST and He will take care of the results.