Here are other radiation precautions you might consider following:

1. Avoid toothpaste that has fluoride as it hurts anyone exposed to radiation because it pulls iodine out of the body which leaves one‟s thyroid exposed.

2. Do not take the tablet KI unless you know you have been exposed to radiation because it will damage a healthy thyroid.

3. Although alternative health-focused people usually recommend using crystal or sea salt because of their added mineral content, now is the time to take the salt sold in supermarkets as it usually contains 0.01% potassium iodate, which helps protect us from radiation. But before buying check that this salt has potassium iodate in it and not potassium iodide. In Europe and America you will be able to get in health and alternative organic stores Liquid Black Walnut, Black Walnut Capsules and Kelp, all have a large amount of good iodine in them.

4. Algin, which is Sodium Alginate from Brown Seaweed, pulls radiation out of the body.

5. Miso broth is the classic food for prevention of radiation damage. There is twice the protection if a quarter-ounce/5 grams of dried kelp seaweed is added to the soup. But note in the future one should check where the dried kelp has come from. In scientific studies, seaweed was able to neutralize radioactive isotopes in the human body. Researchers at McGill University say radioactive strontium binds to the algin in brown seaweeds to create sodium alginate, a compound easily and harmlessly excreted. Common black tea exhibited the same anti-radiation effects in several Japanese studies.

6. High doses of Vitamin C are excellent against exposure to radiation as are citrus fruits like lemons, oranges and apples. Eating lots of orange and dark green foods (sweet potatoes, winter squash, beets, carrots, chard and spinach, for example) can help protect you from radiation-induced cancers. All cabbage family plants - including arugula, turnips, radishes, cauliflower, mustard greens, bok choy, Brussels sprouts, broccoli, kale, collards, protect your cells from the damaging effects of radiation. It is said that the herb Rosemary will also protect.

Here are links with more information about radiation precautions:

Now and in the foreseeable future, it is important for people to check where the food they are eating has been grown or comes from. This is because the radiation in the atmosphere was first carried by air currents to Eastern Russia and then on to the West Coast of Canada and America and afterwards to the Northern Hemisphere of Europe. Radiation will be higher in the earlier places where it first fell. We already hear that they have stopped testing milk for radiation in California, and can therefore assume that they suspect that radiation is higher than it should be. If this is true, for the time being, people would be advised to stop buying yoghurt or milk from this area of the USA.

For those who eat fish and sea products, life from the sea will need to be carefully checked to find out where it originated because the currents in the oceans will have followed the air currents. Meaning the dispersal of radiation off the west coast of America and Canada will again be greater.

Here are links on global prevailing jet streams for both the North and South hemispheres.

The path of radioactive fallout/radiation from the Japanese nuclear plants coincides with the prevailing jet streams around the world. Hence meteorologists base their forecast of radiation/fallout on these jet streams.

More detailed forecasts/maps for specific radiation with time-lapse functions for several days can be found at these links--forecasts are updated daily with dates located above the map:

Where to Go During an Earthquake 

Remember the warnings about hiding under a table or standing in a doorway during an earthquake, hurricane or tornado? Well, forget it! This is a real eye opener. It could save your life someday.

EXTRACT FROM DOUG COPP'S ARTICLE ON 'THE TRIANGLE OF LIFE'

My name is Doug Copp. I am the Rescue Chief and Disaster Manager of the American Rescue Team International (ARTI), the world's most experienced rescue team. The information in this article will save lives in an earthquake.

I have crawled inside 875 collapsed buildings, worked with rescue teams from 60 countries, founded rescue teams in several countries, and I am a member of many rescue teams from many countries. I was the United Nations expert in Disaster Mitigation for two years, and have worked at every major disaster in the world since 1985, except for simultaneous disasters.

The first building I ever crawled inside of was a school in Mexico City during the 1985 earthquake. Every child was under its desk. Every child was crushed to the thickness of their bones. They could have survived by lying down next to their desks in the aisles. It was obscene -- unnecessary.

Simply stated, when buildings collapse, the weight of the ceilings falling upon the objects or furniture inside crushing these objects, leaving a space or void next to them - NOT under them. This space is what I call the 'triangle of life'. The larger the object, the stronger, the less it will compact. The less the object compacts the larger the void created, the greater the probability that the person who is using this void for safety will not be injured. The next time you watch collapsed buildings, on television, count the 'triangles' you see formed. They are everywhere. It is the most common shape, you will see, in a collapsed building.

SAFETY TIPS DURING AN EARTHQUAKE
1. Most everyone who simply tries to 'duck and cover' when a building begins to collapse are crushed to death. People who get under objects, like desks or cars, are crushed.

2. Cats, dogs and babies often naturally curl up in the fetal position. You should, too, in an earthquake. It is a natural safety/survival instinct. You can survive in a smaller void. Get next to an object; next to a sofa, next to a bed, next to a large bulky object that will compress slightly but leave a void next to it.

4. If you are in bed during the night and an earthquake occurs, simply roll off the bed. A safe void will exist around the bed. Hotels can achieve a much greater survival rate in earthquakes, simply by posting a sign on the back of the door of every room telling occupants to lie down on the floor, next to the bottom of the bed during an earthquake.

5. If an earthquake happens and you cannot easily escape by getting out the door or window, then lie down and curl up in the fetal position next to a sofa, or large chair.

10. I discovered, while crawling inside of collapsed newspaper offices and other offices with a lot of paper that paper does not compact. Large voids are found surrounding stacks of paper.

In 1996 we made a film which proved my survival methodology to be correct. The Turkish Federal Government, City of Istanbul, University of Istanbul Case Productions and ARTI cooperated to film this practical, scientific test. We collapsed a school and a home with 20 mannequins inside. Ten mannequins did 'duck and cover,' and ten mannequins I used in my 'triangle of life' survival method. After the simulated earthquake collapse we crawled through the rubble and entered the building to film and document the results. The film, in which I practiced my survival techniques under directly observable, scientific conditions, relevant to building collapse, showed there would have been 0% survival for those doing „duck and cover‟.

There would likely have been 100% survivability for people using my method of the 'triangle of life.' This film has been seen by millions of viewers on television in Turkey and the rest of Europe, and it was seen in the USA, Canada and Latin America on the TV program Real TV.

'We are but angels with one wing, it takes two to fly' so spread these tips and save someone's life. The entire world is experiencing natural calamities, be aware and prepared!

Extract from Doug Copp‟s article on 'The Triangle of Life'

If you are inside a vehicle, come out and sit or lie down next to it. If something falls on the vehicle, it will leave an empty space along the sides. See below: 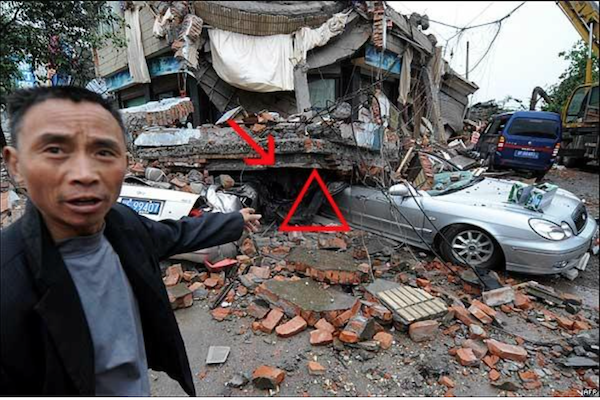 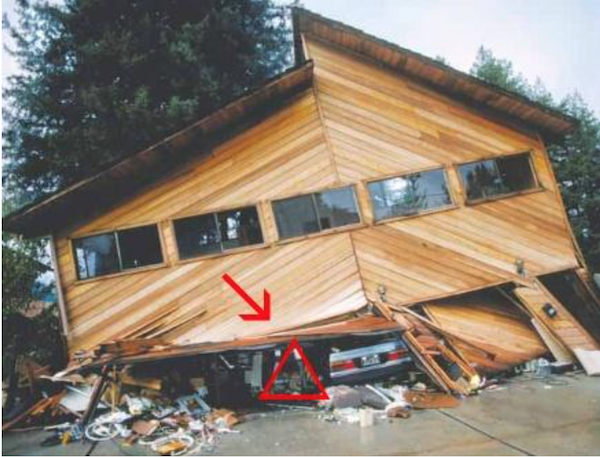 Save your life with "The Triangle of Life"

A safe void (triangle) will exist around a bed, a sofa or other large furniture. Curl up into the fetal position, make yourself small.

The first and last tool we have to keep us healthy, when disease or disaster threaten us, is of course, our thoughts – which is logical when we think that before any action is a thought. To put thoughts into a particular visualisation is very powerful. People with serious diseases have healed themselves with visualization alone. So why not try to protect ourselves by imagining being covered with a protective cloak or put yourself inside a large see-through multi-color rubber ball that will keep out any toxic poisons that radiation would bring?

These types of visualizations are useful whenever you or your home, car, family etc. are in potentially any situations that could require protection. When the visualizations are done on a regular basis and with concentration, they can be enormously beneficial.

Finally the power of our Lord Sathya Sai is the most potent tool of all. With our trust and love in Him and our prayers to Him for all of us, especially all our sisters and brothers who are suffering from natural disasters or war, will be the best protection of all.

Samastha loka sukhino bhavantu. May all the beings in all the worlds be happy