In the summer of 2017, the practitioner noticed over the past few weeks that all the leaves of her gardenia plant including the new ones were turning yellow. A gardenia bush with yellow leaves is a common problem that is difficult to fix. Her gardener added all the necessary nutrients such as magnesium and iron to boost it up, but nothing helped. He then checked the pH of the soil and also reduced the amount of water, but there was no difference. After all his efforts, the gardener thought that the plant would not be able to survive and he was ready to uproot it.

However on 24 July 2017, the practitioner decided to treat the gardenia (see pic) with vibro. 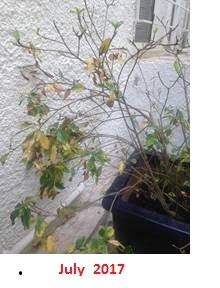 She added a drop of CC1.2 Plant tonic to a cup of water and watered the plant 3-4 times a day for four days. At the same time, she talked to the plant, expressing her love and requesting that it should try to survive.

After four days, she noticed that all the new leaves had remained green. The practitioner then had to go abroad for just over a month and the plant was getting watered by an automatic sprinkler system. The weather in Athens was extremely hot during the entire summer.

However, when she came back in September, to her delight, all the leaves were now green and plant was healthy. 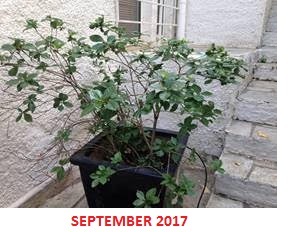 Another photo taken in October shows that the plant continues to do well, as the number of leaves and their size have both grown. 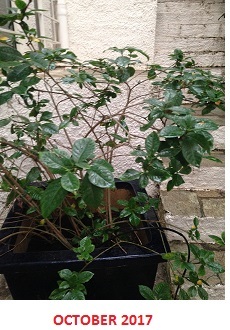