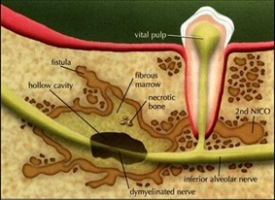 jawbone from the radiation treatment he had undergone prior to going to India. Necrosis is death of body tissue. It occurs when there is not enough blood flowing to the tissue, whether from injury, radiation, or chemicals. The doctors and surgeon recommended surgery to take a piece of his leg bone and implant it into the jaw after the dead bone had been removed. He did not want to do surgery. Instead he chose Vibrionics and Hyperbaric Oxygen therapy.

The practitioner mailed to the patient:

CC17.2 Cleansing + CC21.11 Wounds & Abrasions…QDS was added to the original combos. He was mailed three bottles.

In a hyperbaric oxygen therapy room, the air pressure is raised up to six times higher than normal air pressure. Under these conditions, your lungs can gather much more oxygen than would be possible breathing pure oxygen at normal air pressure. The blood that carries this oxygen throughout the patient’s body, stimulates the release of substances called growth factors and stem cells, which promote healing. In September 2012, dosage was adjusted to TDS. The patient found TDS was convenient for him. He was mailed four bottles. He continued with the remedy until the piece of jawbone was pushed out of his mouth.

In July 2013, he contacted the practitioner after a visit with the doctors who told him the necrosis was gone and he was healed.

“Due to a radiation therapy used to treat a cancer in my neck in 2006, a bone disease appeared in my jaw on May of 2012. During a visit to the University of Texas, MD Anderson Cancer Centre, USA, I was treated for the second occurrence of cancer in June of 2012. To solve the problem, they decided to remove a piece of the bone in my jaw that was compromised, and replace it with a piece of bone extracted from my leg.

I decided not to undergo the procedure indicated by the doctor and instead chose to do Hyperbaric Oxygen treatment that was performed during the months of July and August of 2012. At the same time I had begun Vibrionics treatment.

In October of 2012, tests at MD Anderson Medical Centre showed that the piece of dead bone was no longer attached to the jawbone, which according to the doctor was a good thing.

In about two to three months after my visit to MD Anderson the piece of bone was expelled from my jaw through the gum. During this period I had constantly continued the Vibrionics treatment.

In July of 2013, during a check-up at MD Anderson, I was told that everything was OK with my jawbone. Contrary to what the doctor wanted, which was surgery, I decided on Hyperbaric Oxygen and Vibrionics and the problem was solved.

By the way, when the (neck) cancer came back on January of 2008, I was told that it was incurable. On July 30, 2008, while in Puttaparthi, India, Sai Baba came to my dream and told me that my cancer was a thing of the past. Two months later the tests showed no sign of the cancer and so did the tests on July, 2013, five years later.”