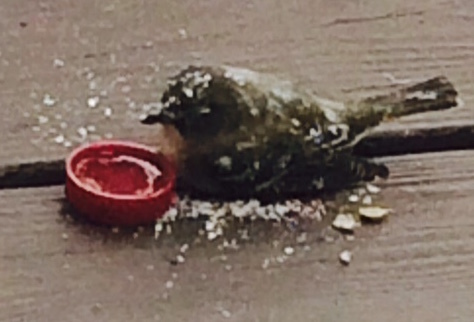 On 22 September 2015 a small warbler flew into a window of the practitioner’s house. It slammed into the glass at an angle and dropped to the deck. The practitioner grabbed a container of vibhuti and rushed out to sprinkle it on the bird and chant the Gayathri mantra. The bird was not moving, its head hung down, and it was initially panting very quickly. Its breathing gradually slowed and weakened. The practitioner stroked the little bird’s back lightly. The bird appeared to have stopped breathing. Hurriedly the practitioner prepared vibro remedy in water in a small bottle cap, which she had at hand:

She gently put the cap up to its beak while stroking its throat. Suddenly the bird swallowed some of the water. After a few minutes the bird lifted its head and took some more water. Within a short time, the bird began rotating its head to look around, its eyes blinking. After several minutes, the practitioner offered the bird a third dose of vibro water but the bird didn’t drink. Instead it shot into the air with tremendous strength and flew off. The encounter lasted no more than 20 minutes.