A woman, age 49, contacted the practitioner in March 2012, after hearing from her twin sister how vibrionics had helped her. She had a list of issues. We decided to start treatment with the most problematic in terms of her daily activities. She had torn the 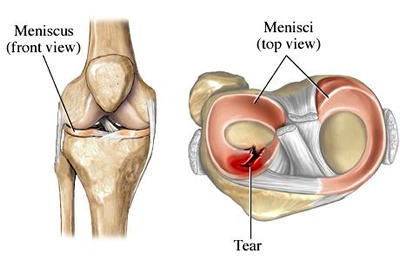 Meniscus in her left knee and had been living with daily pain. A torn meniscus is one of the most common knee injuries. Any activity that causes a forceful twist or rotation of the knee, especially when putting the pressure of the person’s full weight on it, can lead to a torn meniscus.

Each of a person’s knees has two meniscuses, C-shaped pieces of cartilage that act like a cushion between your shinbone and your thighbone. A torn meniscus causes pain, swelling and stiffness. The knee might feel unstable, as if it's going to collapse. The practitioner started her on:

“I  began  taking  the  "Pearls"  about  18  months ago  (March,  2012). The  vibrionics  practitioner referred to these healing gems as Pearls. As I began to take them, I shortly began to feel the healing effects. I totally agreed with her. I was diagnosed with a torn Meniscus in my left knee almost three years ago. I did knee exercises and massaged my knee frequently, but the pain persisted. A year later, I heard about the practitioner through my sister, who had sent me an email about her work and Sai Vibrionics. We are both Baba devotees, and after reading the Vibrionics website, I felt that it was a Godsend. I emailed the practitioner with a list of my 'maladies'. She emailed me back with a time and date to talk. The following week, we met over the phone and talked for an hour. We had so much to talk about, and most of the talk, of course was about our Beloved Baba and His love for humanity and our children.

I started taking the Pearls about two weeks later. Within two months, I felt a great difference.

I was able to walk with less pain. I had suffered tingling pain in that area, that even when I just put my hand over my knee, without touching, there was pain! Slowly but surely, the pain began to dissipate. One day, from the advice of a dear friend who is a Yoga teacher, I was told to start doing squats. Squats! I was terrified to do squats. To me, that is a lot of deep, deep bending. He told me to take my time, and the minute it became uncomfortable, stop. So I began, twice a day, maybe hold for 1 - 2 seconds. Yes, seconds!

Today I can do squats and hold for 30 seconds or more. I know that this is the Pearls at work. The Pearls have brought 100% healing to my knee. I can walk, squat and exercise with no pain. I am forever grateful to the practitioner, the "Pearl Lady" for her tireless work with Sai Vibrionics, and her wonderful and insightful intuition. I am forever grateful to our Beloved Sai Baba for giving this gift of healing to the practitioner and the many Sai vibrionics practitioners all over the world.”